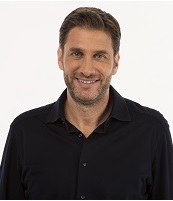 Join us for an entertaining conversation with Northwesten alum, Mike Greenberg, the host of ESPN’s new morning show Get Up, debuting on April 2nd.  Mike for the past two decades was the co-host of ESPN's Radio's Mike & Mike Show, and is also a New York Times best-selling author.

Attendance is limited and offered on a first-come, first-serve basis. If you need assistance with logging in or registering, please email us at info@kelloggfn.org.

Lunch will be provided

Mike Greenberg is the host of ESPN’s new morning show Get Up, which will debut on April 2, 2018 and also features Michelle Beadle and Jalen Rose. For almost two decades, sports fans woke up with Greenberg (“Greeny” as he is called) as half of ESPN Radio’s Mike & Mike, with co-host Mike Golic. Greenberg joined ESPN in September 1996 as an anchor for the launch of ESPNEWS. He later anchored SportsCenter for many years, even long after Mike & Mike launched on January 3, 2000. In 2016, Greenberg and Golic were inducted into the National Association of Broadcasters’ Broadcasting Hall of Fame. Greenberg was also inducted into Northwestern’s Medill Hall of Achievement.

In 2007, Greenberg’s first book, Why My Wife Thinks I’m an Idiot, spent five weeks on The New York Times’ Best Sellers List and was nominated for a Quill Award. It was the humorous self-deprecating account of his life as sports fan and husband. In 2010, Greenberg, along with Golic, released Mike & Mike’s Rules for Sports and Life, which reached number 3 on The New York Times’ Best Sellers List. In 2013, Greenberg debuted his first novel, All You Could Ask For, as a tribute after a family friend, Heidi Armitage, was diagnosed with breast cancer in 2009 and lost her battle to the disease that same year. The novel was a New York Times Best Seller and Greenberg, along with his wife Stacy, donated 100% of the proceeds from the novel to the V Foundation for Cancer Research. Greenberg’s second novel, My Father’s Wives, was published in 2015.

Prior to joining ESPN, Greenberg worked as a reporter for SportsChannel Chicago and as a sports anchor/reporter for the regional cable news network CLTV in Chicago. In addition, Greenberg had worked for Chicago’s WSCR-Radio serving as a reporter covering events including the World Series and Super Bowl and talk show host. He was also a syndicated sports columnist for the California-based Copley News Service, writing a weekly column in the mid-1990’s and served as a sports anchor/reporter at Chicago’s WMAQ-Radio.

Greenberg is a graduate of Northwestern University’s Medill School of Journalism. The New York City native is married and has two children.