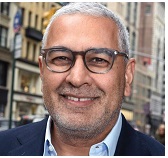 In 2016, Sunil co-founded truePTS, a next generation post-trade and regulatory reporting Fintech company and in 2014, he co-founded Digital Asset Holdings, a pioneering firm that develops technology to enhance efficiency, transparency, compliance and settlement of financial assets using cryptographic, distributed ledgers.

Sunil was also the co-founder and CEO of Creditex from 1999 to 2009, until its sale to ICE (NYSE: ICE) in 2008. Sunil launched and shaped Creditex, building it up to be a leading global credit derivatives execution, processing, fixings, and clearing platform.

He was also a co-founder of T-Zero which was sold alongside Creditex to ICE in 2008.  In addition, while at Creditex, Sunil led the acquisition of The Clearing Corporation (TCC), which allowed ICE to clear credit derivatives globally. Sunil also created and helped make successful the credit event fixings methodology in 2004, which is still used today for credit derivatives settlement purposes during bankruptcies.

Prior to Creditex, he was a swaps and derivatives trader at Deutsche Bank, before which he worked in swaps at Bankers Trust.

In addition to his numerous successes in the financial sector, Sunil is also the founding investor in SeatGeek, the largest online search engine for sports, concert and theater tickets.

Sunil earned a BS in Computer Science from Washington University and received his M.M. from the Kellogg School of Management at Northwestern University.